Here is the text of the meeting minutes that is applicable:

– Letter is placed in the Statesman Examiner and you can view it here http://www.boarddocs.com/wa/colsd/Board.nsf/files/9KCTP35D6902/$file/Resignation%20Letter.PDF 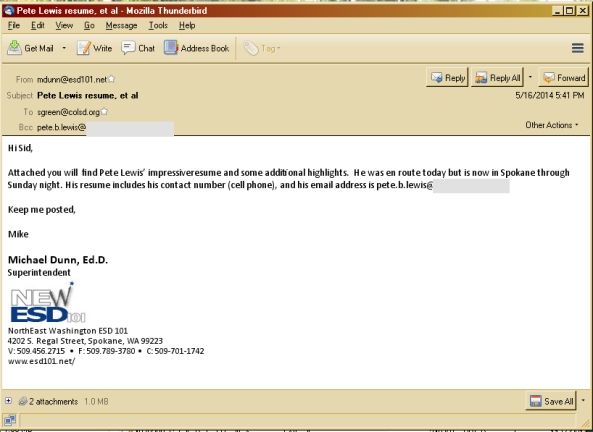 May 16, 2014 Sid Green responds to Michael Dunn saying he went online and read all the information about Pete Lewis. 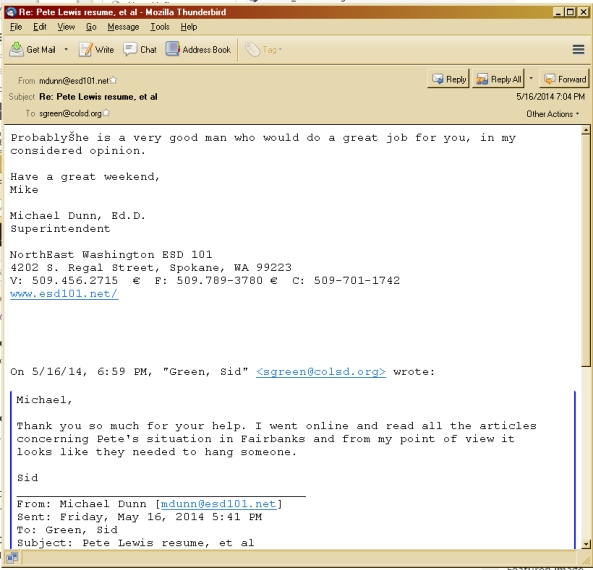 May 21, 2014 Colville posts a job opening for superintendent stating  applications being accepted until June 5th.

Attachment to above email (in part)

May 28, 2014 School Board accepts Michael Cashion’s resignation in legal school board meeting.

– Link to May 28, 2014 school board agenda http://www.boarddocs.com/wa/colsd/Board.nsf/public

May 28, 2014 In email correspondence (received through a public records request) Michael Dunn ESD 101 asks Sid Green if he can interview Pete on June 6th

Read number 5 in email below.

June 9, 2014 Colville School Board Meeting to Evaluate the qualifications of one or more applicants for public employment in an executive session.

– Below I have attached my hand typed notes from the digital recording I took of the Executive meeting before and after the interviews.

Sid Green Alright, let’s call the meeting to order. Stand for the pledge.

Sid Green Somebody stole the flag. (garbled) it’s in that corner. It’s usually over there. Somebody sto… Oh, it’s out there.

Sid Green Alright, we are going into executive session to evaluate the qualifications of one or more applicants for public employment in accordance with RCW 42.31.10. We will be gone, let’s say, three hours. So we’ll try and reconvene again at nine. Got it?

Scott Martin Do we know what job this is for?

Krista Ohrtman Wasn’t it listed on there?

Bill Pifer One other question. I’m assuming there is more than one applicant.

Bill Pifer Are you on a scheduled time?

Sandy Moore Yes, we are.

Bill Pifer So, we would have an applicant coming later?

Sandy Moore We have someone coming at 7,

Bill Pifer Ok, that’s what I wanted to know.

Sandy Moore And another at 8.

Bill Pifer And they will come directly to your meeting, they won’t come back here?

Sandy Moore They will not come back here as far as I know.

Sandy Moore We won’t reconvene until 9

Sid Green We are reconvened.

Sid Green: Because we didn’t put it on the agenda.

Sandy Moore no decision has been reached. What we did was we went through a process where we had a scoring system that Fred used based on interview questions, interview ambiance, gut feelings, reference checks,

Sandy Moore screening of qualifications, experience, qualifications for the three candidates that we interviewed and there was one candidate that scored at the top and we are willing to release that name tonight, and that candidate was Pete Lewis.

Sandy Moore Fairbanks, Alaska, the superintendent of the school.

Sid Green So to formally do this we are going to have to call a special school board meeting for Wednesday at 6.

Sid Green Or one of the other two. And in which case we will – if we pick – we will go from there in trying to work a contract.

Sandy Moore So, (garbled) this is not how we would like one of the other candidates to find out about the …

Kris McKellar I’m just programming in the school board meeting.

Sandy Moore But you see what I’m saying? If you could use some discretion until …

Sandy Moore Well, right, but I mean, you could … in the next five minutes call the other two candidates.

Scott Martin It sounds like the decision’s been made and …

Sid Green No that’s just how we went by the scoring points.

Sid Green One’s in southern Idaho, that’s the one we did a phone interview with.

Sandy Moore … respectful of .. A decision has not been made, we can actually … at Wednesday say that we don’t want any of the candidates and start again at that time.

Scott Martin Were there more than the three that were interviewed?

Sandy Moore No, three were interviewed.

Scott Martin Were there more than that that applied?

Kris McKellar And how were they reduced down to the three?

Sandy Moore Because the other two did not, there was a … Fred put together a screening process

Sandy Moore Based on … yeah … the requirements as listed in the description of the job and they did not meet the threshold for interview.

Sid Green Alright, anything else guys? I need a motion to adjourn

June 9, 2014 Pete Lewis was fired from his position in Fairbanks

Here is a partial copy of the meeting minutes for the Fairbanks meeting:

One comment on “Documentation for Questionable Interim Superintendent Hiring”